Home › Blog › When Do Termites Swarm in Florida?

When Do Termites Swarm in Florida?

When do Termites Swarm in Florida?

Starting in early March, large swarms of subterranean termites swarm in Florida every year. Since Florida has the most termite species in the United States, large swarms of various types of termites continue through the summer months. While this is the most likely time of year to see flying termites, we've received calls for swarming termites year-round. 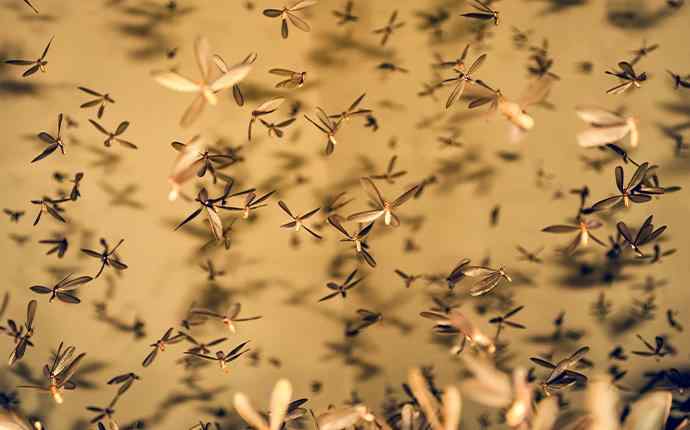 What Termites Swarm in Florida?

Formosan Subterranean termites swarm in Florida from March through June every year. This type of termite is by far the most destructive termite in Florida. They have massive colonies that cause rapid wood damage. We have been told they can consume up to two to three pounds of wood in a standard size home per day!

Subterranean termites live underground and will build shelter tubes (mud tubes) out of pieces of soil and wood to protect themselves from predators and dry environments while traveling between a food source and their nest. Formosan termites in particular can actually create aerial termite colonies, where they swarm and can form a colony in a structure without requiring soil contact.

Eastern Subterranean Termites are one of Florida's native subterranean termites. They typically swarm from November through May each year. These are small and dark colored termites that swarm during daylight hours.

Like other termites, Eastern Subterranean termite swarmers are attracted to light so you will often find their discarded wings on windowsills.

The Dark Southeastern Subterranean termite is approximately 1/3 of an inch long and have a dark-brown of black body. Swarming occurs in the summer months during the daytime hours.

These termites prefer wood with an over 20% moisture rate. Leaks and conducive conditions including mulch along the exterior foundation of your home or tree stumps located on your property can attract subterranean termites to your home.

These termites typically swarm from November to March and swarms in the evening. Due to the time of day these termites swarm, they may be mistaken for drywood termites. It is very important for termite inspectors to properly identify the type of termite present since eliminating them relies on the correct treatment being performed.

Cuban Subterranean Termites are found on the southeast coast of Florida from the Florida Keys up to Palm Beach. These termites swarm from September to February with peak flight taking place in December. These flights typically occur at dusk or at night and like other flying termites, they are attracted to light.

West Indian Subterranean Termites have rectangular heads and the alates have wings that are approximately 9-10mm in length. The upper bodies are a pale yellow-brown to orange-brown and the margin of the wings has tiny hairs.

Their swarms occur at dusk or at night and are most active in the rainy season in Florida in May and June. Smaller flights can occur from August through November and it often rains shortly before these termites swarm.

West Indian Drywood Termites usually swarm from April through June, however, these flights can occur anytime of the year. The alates (swarming termites) have two easily identifiable pairs of hairless, but irridescent wings, which have three to four darkened and pronounced veins within the margin of the wings.

Drywood termites in general are more common in older metropolitan areas with aged wooden structures and high population density. They create termite droppings (frass) from the wood they consume, which are often found underneath the wood they have infested. The frass varies in color, including cream, red or black.

These termites have been recorded as swarming indoors in Florida in all months of the year except for December. The majority of their flights occur from September to November and during the daytime hours.

Florida Drywood termites are present from St. Johns County south. Since they require high moisture content, they are most often found in dry, dead trees, logs, stumps and branches. We have often seen them in dead branches within ficus hedges that have been killed by whiteflies.

Alates of this termite species are 8.5 to 9.7 mm long and the head and body are a dull, pale brown color. Their wings are long and the wings have three to four veins visible in the third of the wing closet to the body. Peak swarming season is March through May.

Dampwood termites are the largest termites in Florida, but they cause the least amount of structural wood damage. Unlike Subterranean termites, they do not forage and soil and are typically only found in structures when there is a water leak, as they require high moisture.

Dampwood termites swarm in Florida from late Spring to early Winter. Their flights occur at dusk or night and can get into homes when doors or windows are open at night with light attracting them into the house.

The alates (reproductive termites) of Cone-headed Termites have dark bodies with dark wings. These termites swarm in Florida annually during the rainy season, from May to November, usually after rainfall.

Mature colonies of Cone-headed termites can reach up to 50,000 workers and as their name implies, these termites have heads with a cone-shaped forward projection.

Why do Termites Swarm?

Termites swarm when they are seeking to reproduce and create new colonies. After a brief flight, the alates (reproductive termites,) shed their wings and begin to look for potential nesting sites within wood.

When male and female termites mate and the females begin laying eggs in the new colony location, the new colony begins to form. When the eggs hatch, the larvae molt into worker termites and then some of those turn into soldier termites.

Eventually these new termite colonies mature and reach the point of being able to produce their own alates to continue the cycle of new colony creation.

When we receive calls, people often are shocked by the termite swarmers and want to schedule a termite treatment immediately to stop further wood damage.

Unfortunately, it can take as long as five to ten years for termite colonies to fully mature to the point of producing swarming termites. This means by the time they are swarming inside of a home, they've been there damaging wood already for quite some time.

Termites swarm in an attempt to create new colonies. Flying termites are attracted to light, so homes and commercial buildings are often targets. While you can't always keep the lights off, there are things you can do to help reduce the attraction of your home to swarming termites.

How to Stop Swarming Termites in Florida?

So first, it's critical to identify the swarming termites you are seeing. A licensed and best reviewed termite control company like Native Pest Management can schedule a free termite inspection.

If swarming drywood termites in Florida are identified, the first option is a tent fumigation. This process requires extensive preparation and leaving your home for two nights. A termiticide gas is put into your home which kills 100% of the drywood termites and this gas dissipates upon removal of the tent.

The good thing about tent fumigation is that when properly performed, it completely eliminates all drywood termites present in the structure during the tenting process. The downside is it is the most expensive termite control option, requires lots of preparation, and has no residual control to prevent future termite infestations.

No Tent Termite Treatment in Florida

When drywood termites swarm in Florida, another option for control is the No Tent Termite Treatment method. This process allows you to stay in your home with minimal preparation needed.

A borate dust or liquid is applied onto the exposed wood in your attic, active areas of drywood termites are injected with a termiticide foam, and a preventative application of foam or dust is applied in areas of the home most susceptible to future termite activity.

Tentless termite treatments are popular because you can stay in your home, minimal preparation is needed, it is a less costly treatment method that is guaranteed, it doesn't require poisonous gas, and it has a residual that helps prevent future termite activity.

The downside to No Tent Termite Control in Florida is that it is unlikely to completely eliminate termites after the initial treatment. While a transfer effect of the product helps eliminate termites hidden within wood, some smaller drywood termite colonies may be hidden, and won't make themselves known until they produce visible termite droppings or they swarm and take flight.

At Native Pest Management, we specialize in both tent fumigations and no tent termite control options. Call us today to schedule a free inspection!

While a termite spot treatment of visible drywood termite activity may eliminate the termites present in that specific area of wood, it is not a treatment that we recommend. There is a high likelihood that if termites have ever swarmed in the home, there are colonies present in more than one area that would fail to be controlled by a simple spot treatment.

It is our opinion that doing a more comprehensive treatment that is guaranteed, such as a tent fumigation or a No Tent Termite Treatment, will be far more effective.

Termite bait stations are our favorite method of preventing subterranean termites. It is the most "green" method of termite control we provide. It is also guaranteed and is proven to be effective when installed and monitored correctly.

There are various types of termite bait stations in Florida. There are monitoring stations which only have wood in them and are checked quarterly until activity is noted, at which time active bait is installed.

At Native Pest Management, we prefer using Trelona Advanced Termite Bait Stations that have active bait in them the day they are installed, to provide you with the peace of mind that your home is always protected.

Another effective subterranean termite control method is a trench and treat termite treatment. This treatment includes digging a 12 inch trench along the foundation of your home and applying a termiticide inside the trench for termite control and prevention.

While this treatment method is effective and guaranteed, it is important to know the type of product applied. While a repellant product would prevent termites from crossing, any gap in the soil barrier provides an entry point for termites. At Native Pest Management, we prefer using non-repellant products that actually collapse and kill colonies of termites if they come in contact with the termiticide in the soil.

The downside to this type of treatment is that it disrupts your soil and landscape and can often require drilling in areas of pavers or concrete in order to inject the termiticide product into the soil. 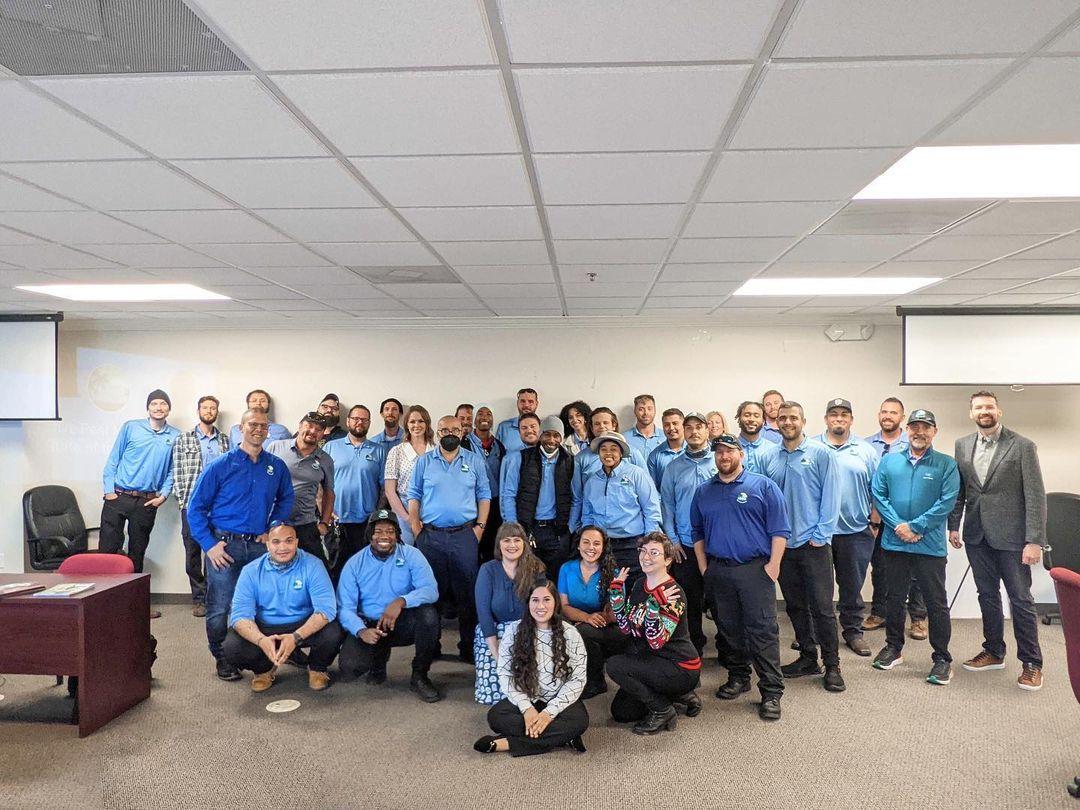 We know that there are hundreds of licensed companies in Florida that can and should be able to eliminate termites in your home. We separate ourselves with our commitment to delivering an unmatched customer service experience while providing pet friendly pest and termite treatments.

With over 2000 five star reviews on Google, Yelp, NextDoor, Facebook and Angie's List, and awards including the 2021 Better Business Bureau's Torch Award for Ethics, we are confident we can identify the swarming termites you may have present in your home and provide a guaranteed treatment to eliminate them as soon as possible.

Call us today to schedule your free termite inspection!

I highly recommend Native Pest Management. Luke and his team go far beyond in assisting with any problem and offer great hints and tips for continued success in keeping your home and surrounding area bug-free without the use of harsh toxic chemicals. We have also had Native spray a product monthly that minimizes mosquitoes lighting on your grass and screen areas. The team there has always been professional and responsive.